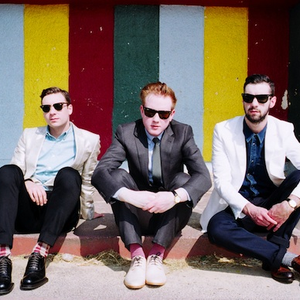 Two Door Cinema Club is a Bangor and Donaghadee, Northern Ireland, UK, electropop / alternative band, formed 2007, consisting of Alex Trimble (vocals, guitar), Kevin Baird (bass, vocals), Sam Halliday (guitar, vocals) and, live only, Benjamin Thompson (drums). The band has released two albums: Tourist History (2010) and Beacon (2012). The band's name resulted from Halliday's mispronunciation of the local cinema's name, Tudor Cinema. In December 2009, they were featured in the BBC's Sound Of 2010 Poll (of 165 British 'taste-makers'). Tourist History was preceded by Kitsuné singles Something Good Can Work (Apr 2009), I Can Talk / I Can Talk Remixes (Nov 2009) and Undercover Martyn (Feb 2010). After the album, EPs: Something Good Can Work (Remixes) (May 2010, Cooperative) and Come Back Home (Jul 2010, Kitsuné) - then, single What You Know (Feb 2011, Kitsuné). Beacon (Sept, Kitsuné), was their second album, led by single Sleep Alone (Aug 2012, Glassnote). Sites: Facebook and MySpace. Read more on Last.fm. User-contributed text is available under the Creative Commons By-SA License; additional terms may apply.

Save Current Playlist in My Music Folder

Buy on iTunes Buy on Amazon Buy on SheetMusicPlus